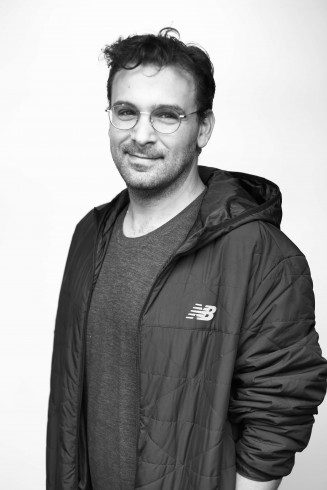 Have you used a GIF recently in your digital communications? For those not familiar with the term, GIF are animated images, more like a short movie on repeat mode.

Nicolas Sassoon, a Franco- Canadian artist based in Vancouver since 2008, has found a unique way to work with GIF as part of his artistic practice. Using early computer imaging processes of the 80s and 90s, he transforms them into a wide array of pixelated forms, figures, patterns and structures that conveys a unique vision on nature, architecture and landscape. His works are abstract, innovative and cross-disciplinary. He has worked with art institutions, major festivals, museums, fashion brands and Alliance Française Vancouver (AFV) as part of its 115th anniversary celebrations in 2019.

The partnership with AFV has grown over time with Nicolas providing valuable insights into the works, challenges and opportunities for digital artists in Vancouver. He imagines the new building as a hub for artists, a place where they can meet each other, collaborate, and importantly learn from peers and mentor each other. To him, that counters the isolation that is sometimes felt when working alone on your computer despite the ultra-connectedness of the virtual world. They face a number of obstacles in Vancouver – a lack of affordable studio spaces, limited access to financing and expensive overheads and administration costs that impact their earning potential.  The pandemic has not made things easier. A number of artist-run studios have closed down, weakening an already struggling cultural industry.

Importantly, the AFV building through its artist studios, performing space, art gallery will create open access to an affordable and universally accessible turnkey space with elevator and direct access to a loading bay and parking in a new, high-tech, eco-friendly and secured building, near transit. The potential for innovation in the AFV spaces is unique. AFV can provide studios for incubation of ideas, creation, collaboration, production but also for diffusion through its other cultural spaces and eco-system of resources in the building, including a proposed media wall in its lobby.

Nicolas loves the fact that a younger audience of AFV students will also benefit from exposure to different art forms and career paths made possible by technology, the preferred mode of expression for many of today’s digital natives.

If you want to learn more about Nicolas, check out his website.