How do they celebrate Christmas in Paris

How do they celebrate Christmas in Paris, France

Everyone goes to the Christmas Market, it is free, and one can always find something fun to eat or for a Christmas gift. The biggest one is in front of the Champs-Elysees, but you can also find some smaller ones all over Paris. It is really nice to drink some hot wine or chocolate while eating a crêpe or some marrons and discovering little shops and crafts. Shopkeepers are coming from all around France to partake in the Christmas Markets of Paris. Thus, you can find products from South France like dry lavender, oils, or soap, and some products from East France, especially from the Strasbourg area, such as gingerbread and ceramics. There are also food shops selling foie gras from the South-West or honey from the mountains. Something typical to French Christmas Markets are shops that sell nativity scene figures. In French, they are called “Santon de Provence” because the creche, or nativity scene, in the South of France is composed of many elements. In addition to the classical, Marie, Joseph, Jesus, the donkey, the bullock, and the Three Wise Men (also called the Three Kings), there are many other figures like “the Delighted,” the butcher, the fish seller, the teacher, the baker, the shepherd, etc. 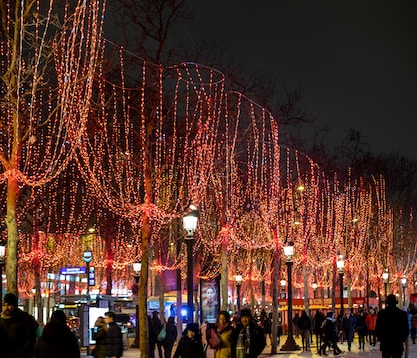 Also, a widespread activity is to see the “vitrines” of Le Printemps and Les Galeries Lafayettes. They are decorated for Christmas with puppets that are animated. Each window display is a different scend. Kids and adults have so much fun watching and walking around!

When do Christmas decorations go up in Paris? It depends on the neighbourhood you live in. Usually, they are financed by either the shops or the city hall of the district's city hall (in Paris, each “arrondissement” has its own major). Usually, it starts end of November, and they put up lights in the trees and across the streets, hanging from one building to the other. There are also big Christmas trees on the streets decorated with bulbs and Christmas wreaths.

The most important part of Christmas is probably the food. As you all know, food is practically a religion in France, especially on Christmas Eve. Christmas eve traditions in France involve a lot of food that is considered festive, like smoked salmon and foie gras. There is no typical menu that everyone follows; people choose between the different foods considered “Christmassy”. The only classic dish for Christmas is the “Buche de Noel’, a rolled-cake with crème patisserie and chocolate or chestnut-taste. They extended the tastes to vanilla, Nutella, berries, whipped cream, etc. In salty meals, most commons are salmon, in different forms (smoked salmon, gravelax salmon, …) turkey, capon, guinea fowl, oyster, jumbo shrimp, scallop, lobster, foie gras, chocolate, and truffle. These meals are always served with wine and champagne. There are many events to celebrate Christmas in advance through December, at work with Christmas dinners, at school with Christmas lunch, and Secret Santa. In most schools, there are also Christmas Trees in classrooms, and they sometimes have advent calendars.

There are also a lot of concerts and various events linked to Christmas, like concerts in churches, operas, Christmas concerts, ballets like the Nutcracker.

Thus, the whole month of December is a lot of fun around Christmas. Concerning the actual Christmas day, Santa comes during the night to drop off gifts. So, traditionally, families open their gifts on the morning of December 25th. However, some people prefer to exchange gifts on the evening of the 24th.

To conclude, there are a lot of things going on to celebrate Christmas in Paris, France. From the whole month of December to Christmas eve, traditions in France are numerous and everyone can find something to their taste!

If you want to improve your French knowledge even more, you can always register to one of our cultural events!