Can you feel the cold? The weather has changed dramatically here in Vancouver and is heavily announcing the winter season and one of our favourite holidays, Christmas!  Previously, we had discussed the famous foods that are eaten for Christmas in France but today, we are going to share with you our top 10 French foods for the winter. We have selected a few of our favorite dishes from several francophone countries that will surely keep you warm this winter.  A word of caution, you might be hungry after reading!

This famous cheese from Switzerland gives the name to the traditional dish that involves taking a thick slice of raclette cheese and melting it near a fire or with a special heating machine, made for the occasion. After you melt the cheese, you scrape it onto some bread, boiled potatoes, or the cured meat of your choice.

Raclette is a very heavy and consistent meal so, it can be a rewarding meal after a long day of skiing.

Who doesn’t love cheese? (even plant-based), our next dish comes from Switzerland as well. Similar to raclette, Fondue consists of Swiss cheese that is melted in a pot over a candle. It is usually eaten by dipping bread in the pot using long- stemmed forks. A delicious shareable meal to keep you warm in this cold weather!

This dish comes from Savoy in the French Alps and involves, you guessed it, cheese! This French specialty has potatoes, onions, lardons (or bacon), a bit of white wine like Apremont, Cignon or Rousette, topped with crème fraiche and Reblochon cheese. De-li-cieux!

This dish was inspired from another Savoyard recipe, péla, which has potatoes, onions, and cheese. 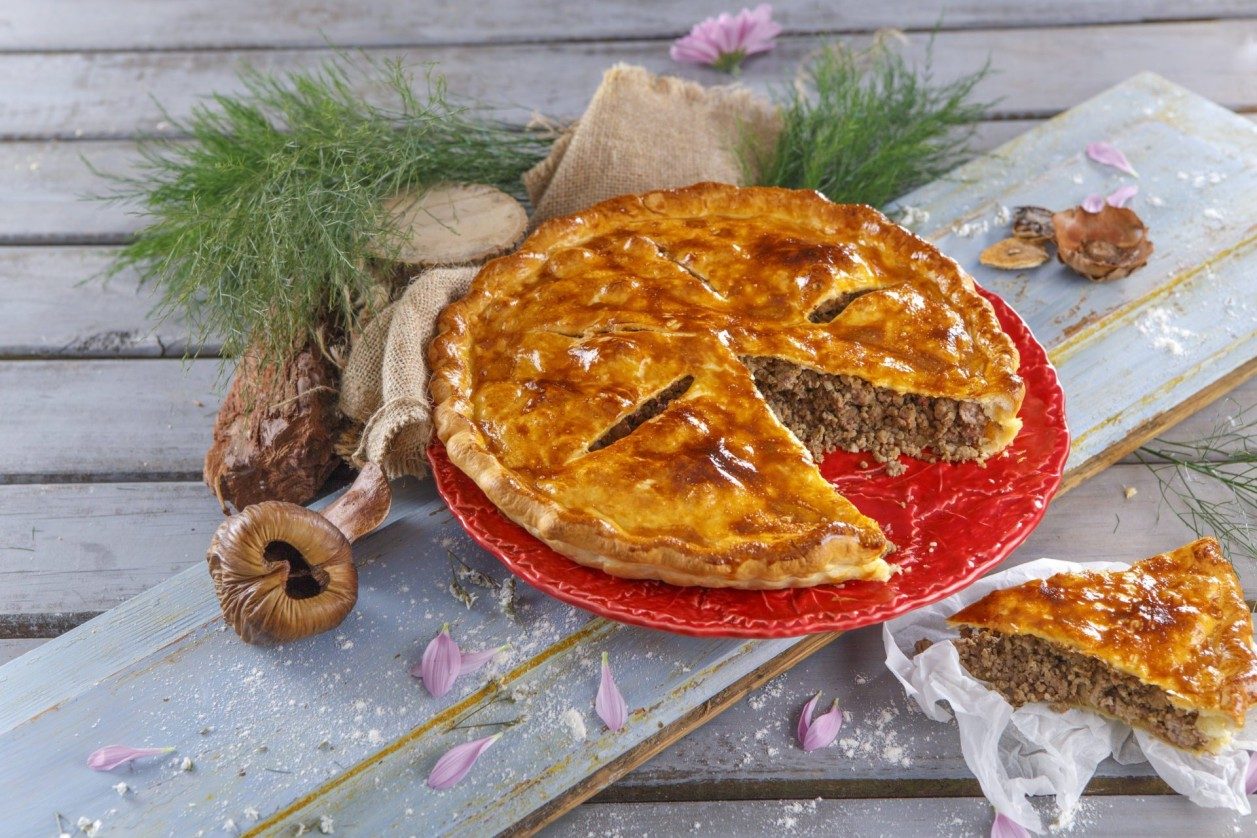 This traditional dish from Quebec is meat pie dish made with pork, veal or beef and potatoes. It is usually served during the Christmas evening or New Years. You can accompany this dish with home made ketchup aux fruits or tomato sauce. A great way to celebrate the holidays!

Choucroute is a recipe from Alsace and it contains sauerkraut, potatoes, sausages, and other curated meat. This dish is tied to the history of the region since sauerkraut is a traditional German dish but was widely adopted when Alsace became a part of France.

Another French Canadian dish,  it is often confused with tourtière since it is very similar; however, the key differences of this meat pie are on the thickness of the pastry, and the time and method used to cook them. It is also different in its origin, since it has more of a British influence.

Considered a national dish of France, pot-au-feu consists of boiled beef and vegetables like carrots, turnips, parsnips, celery, onion, and sometimes cabbage and leeks. It has many variations, depending on the region where it is prepared in France. A warm and hearty meal with broth ideal for chilly winter.

Chapon is made from a cockerel that been neutered to improve the quality of the meat, making it very white and has wide mass. It can be prepared with apples or prunes, with a dressing made of honey and white wine like Riesling. It is a traditional dish served during the holiday dinners.

This dish comes from the northern part of France and it a variation of the croque monsieur. Bread, with ham and melted cheddar sauce topped with a sunny side up egg. This dish with a side of fries is sure to have you full throughout the day !

This Flemish stew is like beef bourguignon but, instead of braising it with wine, you use beer. It is famous in Belgium, the Netherlands, and French Flanders. Its ingredients include beef, onion and spices like bay leaf, thyme, clove, and juniper berries.

Do you have any favourite winter food? Let us know by leaving a comment on our Social Media post!