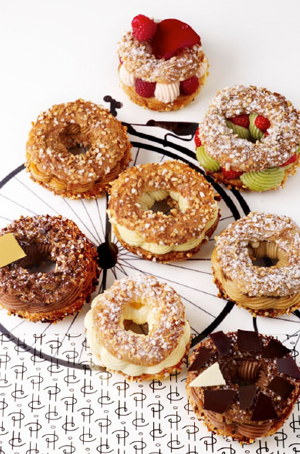 Besides the Tour de France, every four years France holds a 1200 kilometer bicycle race that goes from Paris to Brest and back to Paris (commonly known as "PBP"). This race began in 1891 and it's the oldest cycling event still being run.


The story goes that the same year that this race started, a pastry chef along the bicycle route decided to make a celebration cake called Paris-Brest (pronounced pah-ree-brehst), to honor the race. It was made with a round of choux pastry (meant to resemble a bicycle wheel) that was sprinkled with almonds, and filled with a praline flavored cream.

Elena Krasnova, new trendy chef and owner of  Mon Paris patisserie, will introduce you to a modern version of this traditional dessert.

Want to learn how to make one of the French classics – Paris-Brest?
Elena Karasnova invites you to  Paris-Brest Cooking Class.

As always, you can take this opportunity to practice your French, or just relax after a hard day of work and enjoy your time with a glass of wine in good company!