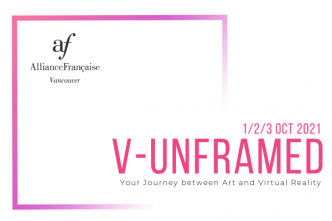 Toronto’s Nathan Phillips Square is flooded. Its infrastructure has merged with the local fauna; mature trees grow through cracks in the sidewalks and vines cover south-facing walls. People commute via canoe and grow vegetables on skyscraper roofs. Urban life is thriving.

Rooted in the realm of Indigenous futurism, Biidaaban: First Light is an interactive VR time-jump into a highly realistic—and radically different—Toronto of tomorrow. As users explore this altered city now reclaimed by nature, they must think about their place in history and ultimately their role in the future.

Anishinaabe director Lisa Jackson’s award-winning fiction and documentary films have screened widely at festivals such as Berlin, Hot Docs, SXSW and London BFI. Her work has also aired on many networks in Canada and earned her a Genie Award (Canada’s Oscar®). Lisa’s upcoming projects include an IMAX film and more traditional film and TV work.

Mathew Borrett creates rich environments using digital and traditional media. His work can be seen on film and TV, and recently in virtual reality experiences as well. Mathew’s home city of Toronto often serves as the inspiration for his work.

Jam3 is a design and experience agency known for smart, innovative and inspired work. They work closely with their clients to first understand their problems and then solve them in creative ways. From their offices in Toronto, Los Angeles and Montevideo, they team up with forward-thinking brands from around the world.

Produced by National Film Board of Canada