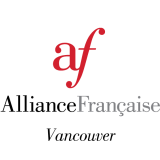 
OUR FUTURE IS DRAWING HERE

Keep in touch with the latest news regarding our reconstruction project

NEWS SUPPORT US WHO WE ARE OUR PROJECT


LET'S OPEN A NEW CHAPTER TOGETHER

Get to know us

SOME STATISTICS ABOUT THE FRANCOPHONE COMMUNITY IN BC*

*from the Office of the Commissioner of Official Languages of Canada

Alliance Française de Vancouver (AFV) is commited its role as Vancouver’s preeminent educational organization teaching one of the two official languages of Canada. The teaching team at AFV is dedicated to developing fluent French language speakers, enriching individuals, communities, and the country as a whole. Children and adults, professionals, retirees, and newcomers to Canada thrive in our classroom-based curriculum taught by inspiring native French-speaking instructors. In our globalized world, where French is spoken in more than 88 member states, fluency means a competitive edge for both companies and employees.

As part of our mandate, we are also proud to offer educational outreach programs to kids in French immersion and Francophone programs from schools in BC. In 2019, more than 200 students benefited from experiential workshops and cultural activities.

Promoting Diversity and Inclusiveness in the Arts

Live performances, film screenings, culinary workshops, visual art exhibitions, lecture series and other special events are held at AFV. Most programs are free and open to the public and are offered in French and English. We also arrange artist-in-residence programs for individual and organizations, allowing local creative artists welcome space to produce, prepare and rehearse.


Let's join us in this wonderful adventure

© Alliance Française de Vancouver - back to the website www.alliancefrancaise.ca